Listed below are homes for sale in Country Grove, a neighborhood located in Southwest Madison, WI. Listings are updated multiple times a day from the SCWMLS.

For more information about any of these Country Grove homes for sale, just click the "Request More Information" button when viewing the details of a property. We can provide you with disclosures, past sales history, dates and prices of homes recently sold nearby in Madison, and more.

And, for your convenience, register for a free account to automatically receive email alerts whenever new Country Grove listings come on the market that match your search criteria.

McKee Road to the north; Tanglewood Drive and East Pass to the east; Country Grove Drive to the south and west

$425,000
48
1113 Pontiac Tr
Madison, WI 53711
Beckers Heritage Estate
4
Beds
3
Baths
2,400
Sq.Ft.
Restaino & Associates Era Powered
Copyright 2023 South Central Wisconsin MLS Corporation. All rights reserved. IDX information is provided exclusively for consumers' personal, non-commercial use and may not be used for any purpose other than to identify perspective properties consumers may be interested in purchasing. This information, provided by seller, listing broker, and other parties, may not have been verified. 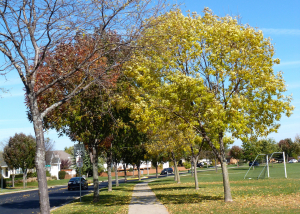 Madison’s southwest side has been a boon for development in recent years. Retailers, restaurants and banks have replaced much of the farmland that once surrounded Madison’s southwest side, but Country Grove has retained its quiet country feel. That’s because Glacier Crossing Park lies directly west of the neighborhood, and Country Grove Park lies directly west. The neighborhood connects to the Capital City State Trail bike path and the Ice Age Trail south of Madison by greenways that extend through Country Grove. Many young families have been drawn to Country Grove, and children and adults alike enjoy the small-town comfort and ready access to parks and schools. Each year, neighbors host a number of social events that build a stronger sense of community. An Independence Day bike parade, holiday parties, picnics and holiday decorating contests are great ways for neighbors to connect. 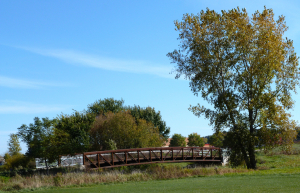 Country Grove was developed on rolling farmland in the late 1990s. Homes in the area are often large and feature modern architectural features, and attached garages can be found throughout the neighborhood. Lots in the neighborhood are also typically spacious, so there’s plenty of room for young families to grow in Country Grove. In fact, young families typically account for nearly half of Country Grove’s population. That makes for an active and engaged community with children running and playing in the parks and greenways. Country Grove is covered almost exclusively by single-family homes, but a small pocket of commercial space can be found in the neighborhood south of McKee Road.

Country Grove is located just miles from Verona and the campus of healthcare software giant Epic Systems. Other surrounding communities are also nearby with Fitchburg and Middleton both about five miles from Country Grove. Popular commercial areas on Madison’s west side are also close by. West Towne Mall is less than four miles away on Gammon Road, Hilldale Mall is less than two miles away and Downtown Madison is less than five miles from the community. Closer to home, Madison’s southwest side has seen an influx of commercial development. Nearby grocery stores, health clubs, restaurants and retailers add to Country Grove’s convenience. The parkland and trails surrounding Country Grove provide abundant opportunities to enjoy nature, too. And Chavez Elementary School is located just across Country Grove Park, which makes for a short walk to school.

$499,900
17
9720 Tiercel Dr
Verona, WI 53593
Hawks Valley
3
Beds
2
Baths
1,618
Sq.Ft.
Stark Company, Realtors
Copyright 2023 South Central Wisconsin MLS Corporation. All rights reserved. IDX information is provided exclusively for consumers' personal, non-commercial use and may not be used for any purpose other than to identify perspective properties consumers may be interested in purchasing. This information, provided by seller, listing broker, and other parties, may not have been verified.
Interactive Map Search Madison Market Stats